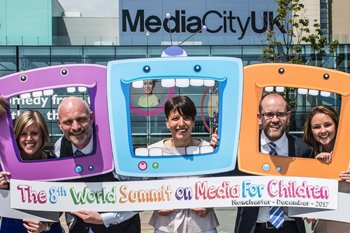 on Media for Children Foundation (WSMCF) has chosen Manchester, BBC Children’s and Conference Partners UK as hosts for the next World Summit in 2017.  The summit will welcome over 1,500 delegates from around the globe to Manchester in December 2017.
World Summits on Media for Children are held every three years and provide a forum for producers, broadcasters, educators and regulators and other professionals committed to the improvement of quality media for children. The Summits have travelled around the world since they first started in 1995 in Melbourne, Australia. Since then, it has been to London, Thessaloniki, Rio De Janerio, Johannesburg, Karlstad, and Kuala Lumpur.
With BBC Children’s as the lead content partner, Marketing Manchester and Conference Partners created the successful bid to host the 8th World Summit on Media for Children in 2017.
The World Summit on Media for Children Foundation is a global movement committed to developing and improving the quality of media for children.
WSMCF President, Dr Patricia Edgar when announcing the successful bid stated: “The members of the Foundation were unanimous in their agreement that Team Manchester’s bid was exceptional and one with which WSMCF will be proud to be associated.  We are pleased to be working with one of the world’s preeminent producers of media for children in the BBC and to see the emphasis on digital media, the inclusion of a creative children’s program and the ambition to leave a genuine legacy following the Summit.”
The vision for the 8th WSMC is to bridge the differences across the enormously diverse media world and find synergies with the exploration of a single uniting theme ‘The Universal needs of Children’. Firmly putting children and young people first, they propose to explore a diverse range of issues of particular relevance to the media and technology industries through the creative, educational and technological challenges and opportunities they present. The universal needs of children, including empowerment, learning, entertainment, connection and protection, will form the organising principle behind the rich and varied programme, and will be explored through talks, masterclasses, workshop sessions and debates. At the Summit’s conclusion the ambition is to harness the collective brain and will power of the Summit to create a lasting global legacy.
Manchester is uniquely placed to facilitate the creation of something exciting as it brings together BBC Children’s, BBC research and development and a number of BBC software developers. Along with the City of Manchester’s ambition to become a world leader in the digital industries, with a wealth of digital agencies based here, and the partnerships which could be converged around a global summit, provides a critical mass for innovation.
Alice Webb, Director of BBC Children’s, stated: “The BBC is delighted to be the lead content provider for the summit. The BBC has been producing media for children for over 90 years and we are constantly inspired to strive harder and challenge ourselves to break new boundaries to inform, entertain, educate and inspire the youngest members of society.  Manchester is a very fitting place to hold the summit, not only is it the home of BBC Children’s, including our two dedicated channels CBeebies and CBBC, but it also has an active and growing creative, media and digital sector who will embrace and celebrate this international event”
Marketing Manchester, the agency charged with promoting Manchester on an international stage, was a leading partner in winning the WSMC 2017.  Nick Brooks-Sykes, Director of Tourism at Marketing Manchester, commented: “We’re very proud to be hosting the 2017 World Summit on Media for Children in Manchester. The Summit is the largest children’s media conference in the world and we’re looking forward to providing the platform for global experts to discuss current issues within children’s media.  The announcement is a major coup for Manchester, which has a well-established reputation within this industry. From the celebrated work of Cosgrove Hall and Mackinnon and Saunders, to the BBC setting up their children’s department at MediaCityUK and Brown Bag Films also recently establishing themselves here; Manchester is no stranger to producing quality children’s media.
The wider creative and digital sector plays a very important role in contributing to the city region’s economy and events like WSMC help us to communicate that message. Now, with the Summit due to command significant attention and generate an estimated £1.6m for the local economy, Manchester’s position as one of the leading creative and digital media hubs in Europe is set to be further strengthened.”
Another key partner in the bid to host WSMC is Conference Partners, a global Professional Conference Organiser based in Manchester who brings over 18 years’ experience in managing more than 1,000 international conferences.  Managing Director of Conference Partners, Nicola McGrane, remarked that “Conference Partners is delighted to be part of Team Manchester in winning this inspirational and rewarding Summit for 2017.  We thoroughly enjoyed creating the successful bid and are eagerly awaiting the many months of planning that lie ahead, ensuring that this Summit is the most memorable one to date.
Managing the 8th World Summit on Media for Children will allow us to build upon the already strong relationships we have in Manchester and it paves the way for many more partnership opportunities to showcase the wonderful city of Manchester to a global audience”
Manchester looks forward to delivering an outstanding Summit in 2017 and achieving the Foundation’s commitment to develop, create and improve the quality of media for children. We look forward to welcoming you to Manchester from the 5th-7th of December 2017.