Our Recent Win at the 2016 ABPCO Excellence Awards

It is with great pride that Conference Partners is delighted to announce that it was awarded the ‘Best Conference by an Agency Conference Organiser’ at the 2016 ABPCO Excellence Awards.

The announcement was made during the ABPCO Chairmen’s Lunch & Excellence Awards in Manchester Central before an audience of 80 event professionals on Friday, 9th December 2016.

Conference Partners were shortlisted to present their submission on the delivery of one of Europe’s leading science conferences, the EuroScience Open Forum (ESOF) 2016 and it was awarded based on the event’s lasting impact and attendee votes secured at the awards ceremony.

Conference Partners successfully delivered ESOF 2016 in Manchester Central on 23-27 July. The UK has a world renowned reputation for scientific endeavour, medical discoveries, innovative technologies and this was the first time that ESOF was held in a UK city, attracting 3,542 delegates from 80 countries, 800 international speakers and 64 exhibitors. 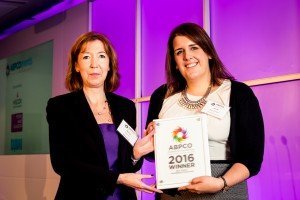